Gay Times: Europe’s Other Side 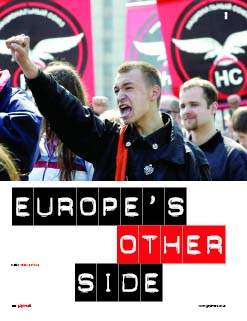 Two years ago, 15 new countries joined the European Union and agreed to abide by its conventions on discrimination. But it seems many Eastern European countries aren’t only ignoring this when it comes to gay men and lesbians, but the Polish government’s refusal to allow a gay event are also actually flaunting it, as GT found when it talked to gay representatives from all over Eastern Europe. Big Macs might have been on sale in Moscow since 1990, but other imports, like gay rights, are taking longer to permeate the former Soviet nation. Maxim Anmeghichean, programmes director for the European Region of the International Lesbian and Gay Association, says that “throwing stones and even shooting in the direction of parades, police brutality, and blackmail and gay-bashing persist in the former Eastern bloc.”

Marchers in Serbia’s first “and only” Gay Pride Parade in 2001 were viciously beaten by thugs and, according to some reports, the police. While some countries, in their eagerness to join the European Union, have become more liberal, ignorance and prejudice remain rife “In the Balkans, violence is all too common, usually people being beaten up coming home from gay nightclubs or other places, and and in Russia and Moldova politicians are even making tenuous noises about recriminalisation. Progress is a double-edged sword. “ As the community becomes more visible, there are increasing attacks in cruising grounds,” says Rob Rhodes, who’s carried out political research in the area. “However, some people are actually beaten by the right-wing and religious members of their own families or friends after coming out. Fundamentalists become more aggressive in fighting back,” he says.

Gauging the full extent of the problem is hard due to a lack of reliable statistics, partly because victims are deterred from reporting homophobic “Visibility causes incidents, fearing police apathy or even further abuse. “The Russian authorities, especially the police, seem to ignore the widespread violence even more homophobia and direct attacks on you.” The intensity and frequency of these attacks vary. While homophobic against gays,” says Nikolai Bayev. “There are no official statistics about violence is becoming rarer in most Eastern European countries, gays murdered in our country. And I know of lots of cases like this.”

Minsk police have failed to arrest the perpetrators of much homophobic violence, including the serial killings of homosexuals in 2001, according to Belarus activist Svyatoslav Sementsov. Instead of record-ing and investigating hate crime, officers ask the victims personal and irrelevant questions, and groundlessly raid gay clubs. “The passive behaviour of the police is an expression of the state’s desire to ignore and to not protect the violated rights of homosexuals,” says Sementsov.

While such violence may be rare, Eastern European gay people still face a raft of prejudice at home, work and school. “My research high-lighted homophobia in schools from both teachers and students, directed at both teachers and students who were thought to be LGBT,” says Rhodes. “Discrimination persists even in university, with reports of more than one lecturer failing a student in an exam because the stu-dent was openly gay and comments by psychology lecturers that homosexuality is ‘sick’? or a perversion that can be treated.”

Gay people are commonly fired or hounded out of their jobs. A 2001 survey conducted by Slovenian association SKUC LL found that 2.9%of respondents said they’d been sacked over their sexuality and 66.9% had experienced harassment at work. Few gay public figures are out and some have even married – the admission of homosexuality can end a career.

But parental reaction can be even worse. Low wages and strong fam-ily ties keep many Eastern Europeans living at home well into their 30s, so any disapproval has a greater impact. The child who comes out can be thrown out of the house or packed off to a psychiatrist – even in ostensibly more tolerant countries. “Let me give you an example of how hypocritical some Slovene people can be,” says Nina Granda, of the lesbian eL Magazine. “If you told me your son was gay, I would tell you: ‘Don’t judge him, be open, try to understand, or watch Oprah’. However, if in a couple of weeks my own daughter told me she was a lesbian, the Slovene hypocrite that I am, I’d send her to a psychiatrist, lock her up, try hard to find some nice-looking boys from the neigh-bourhood to take her on dates, and tell all of my co-workers that my daughter was getting married.”

Such attitudes have been established and reinforced over time. LGBT people were demonised by Communism, which put great empha-sis on conformity. Any individuality or rejection of the norm – not just in matters of sexuality – was dangerous. State propaganda and the pro-hibition of the foreign media gave people little chance to question what they’d been told and even today, many retain an innate suspicion of outsiders – foreigners, gypsies or LGBTs.

On top of that, in the southern countries, particularly the Balkans, a macho, sexist culture has also reinforced gender roles. “Patriarchal atti-tudes prevail in the region, especially in conflict areas where attitudes are quite militarised, with ‘traditional’ notions of how ‘men’? and ‘women’? should look and act,” says Rob Rhodes. “Men are expected to join the Army and support a wife and children, women to get married and make babies.”

Serbian activist Vlatko Salaj adds that gay men are regarded as “pussies, weak and feminine” while Predrag Azdejkovic of Queeria Belgrade notes that they’re seen as “traitors of the Holy National goals”. Declining birth rates in some countries provide family values proponents with more ammunition. But possibly the main force gay people have to contend with is the Church. Sidelined by Communism, it’s now trying aggressively to resume its role in society. Catholicism and Orthodoxy are strong throughout the region: 90% of Poles are Catholic. Moldovan associa-tion GenderDoc-M reported last year that a high-ranking police officer told a public meeting: “For me, the main law is the law of God, accord-ing to which homosexuality is a sin and those who commit it shall die”.

Homosexuals have become a useful and vulnerable target, not just for priests, but also for politicians. “Leaders that want to come across as strong or nationalist define themselves by excluding gay people,” says Sarah Green of Amnesty. “If crime is high, and the social and eco-nomic situation desperate, the police need to be seen to be doing something. LGBTs are easy to find and target, when really they need to target fraud or bootlegging.” In the Southern Caucasus (Georgia, Armenia, Azerbaijan), politicians routinely insult their opponents by calling them ‘homosexual’, adds Maxim Anmeghichean.

While whipping up and exploiting homophobia can be expedient for a politician, standing up for gay rights is a riskier strategy. “No Russian political party dares to support the LGBT community,” says Bayev. “No democratic or liberal politician is openly gay-friendly. They are afraid they’ll be regarded as ‘faggots’ themselves and lose votes.”

With many Eastern Europeans concerned about increasing Western influence, conservative politicians cast homosexuality, along with drugs and crime, as dangerous Western imports. “Homosexuality in most cases is depicted as a trend from the West, sent to Serbia to destroy it,” says Azdejkovic. Paedophilia, pathology and deviancy are other associa-tions, drawn sometimes even in school and colleges. This paranoia and ignorance, along with the increasing assertion of gay rights, have result-ed in a backlash against homosexuality across the region.

“ In many countries where homosexuality is criminalised, it’s from an old law, or the original constitution – it may date back centuries. It just sits there until it’s appealed,” says Green. “What’s worrying is that in Eastern Europe, rather than old laws, we’re seeing new attempts to tar-get the gay community.”

Alex Peènik, editor of the Slovenian Queer Resources Directory, has noticed a difference since a 2004 government change. “Hate speech in parliament now occurs on a regular basis, and it seems ‘the street’ fol-lows the lead very quickly. In Ljubljana, Slovenia’s capital, it used to be extremely rare for gay men to become victims of violence on the street. Last year, we had three attacks in two weeks.”

Tomas Szypula of the Campaign Against Homophobia has observed a similar trend in Poland. “Radical right parties are getting more popu-lar, especially the Law and Justice and Polish Families’ League, which is now in coalition in the Polish Parliament.” And with civic spirit largely crushed by Communism, LGBT groups struggle to defend themselves robustly. “We’re still not emancipated enough,” says Bayev. “We still prefer to go into clubs and cruising areas than to fight for our rights. We’re still too scared.” Nicolas Alexeyev, head of GayRussia.ru, agrees. “We can’t limit our rights to meeting and having fun underground’.”

But Alexeyev puts a lot of the hostility down to poverty, which is rife in the former Eastern bloc. “The more wealthy people are, the less they care about such things.” Another divide is rural–urban. In the larger cities, where people are more educated and forward thinking, there’s tolerance and sometimes a smattering of gay clubs. In the country, where religion and tradition are staunch, living an openly-gay life can be impossible.

This is mainly due to a lack of information, which is why activists see the media as so important. Since the debate in Moscow over Gay Pride, which the city’s mayor, Yuri Luzhkov, is trying to ban, Alexeyev perceives a signif-icant shift in tone. “In the past, homosexuality was usually discussed only by tabloids when they needed to laugh at us. This has changed within weeks. We’ve now got support from journalists.” Parades are vital because they show the public that gay people are normal citizens, while strength-ening gay identity. The internet, too, is a key weapon in informing people and allowing easier communication between LGBT communities. Positive publicity and increased dialogue have had some results. In March, the Czech Republic became the first former-Communist country in Europe to grant legal recognition to same-sex partnerships. “Fingers crossed; I’d say we’re moving forward,” says Nina Granda. “Because we’re getting organised, doing something, books are being published.

“ There are no official statistics about gays murdered in our coun-try. And I know of lots of cases like this” Nikolai Bayev events are being organised, people are getting together, laws are being passed (lousy ones, but still…). A couple of years back, things like this seemed miles away.”

Hungary is another bright spot – notably in terms of legislation. In 2004, it adopted an equal opportunities law that sociologist Judit Takacs of the gay rights group Háttér calls “the first such law in Europe with specific ref-erence to gender identity as a protected category, which is potentially use-ful for transgender people”. The problem is that LGBT people don’t yet take advantage of the legal opportunities afforded them. Still, Háttér continues to raise awareness of the “not-at-all sensational everyday realities of LGB people’s lives” and the country is unusually fortunate in having some vocal NGOs and even a minister fighting the gay rights corner.

Obliged by their EU membership ambitions to commit to legislation such as the European Convention on Human Rights, Eastern European countries at least now have something to which gay people can appeal, even if society’s hostility lingers. Rhodes reports that the Macedonian Army has recently started allowing openly-gay personnel to serve, and cites the case of two gay men in Kosovo who, after being beaten and then enduring further abuse when they reported the incident to the police, “received a nice shock when the chief of police issued a public apology and suspended the officers concerned”.

Given that the last country to decriminalise male homosexual con-senting acts, Armenia, did so only in 2003, and that LGBTs were being imprisoned until 2001, the progress is undeniable. Like most activists, Maxim Anmeghichean believes the only way is forward. “Our human rights arguments are much stronger than the right-wing ones and the truth is with us. The rest is a matter of time.”